A Work of Art

Yesterday the paua and the kina made a sky tower. We red a book about an artist and he made a installation out of rubbish and some kids thought it was rubbish so the Kids picked it all up and put it into the rubbish bin. Then the Artist came and he was so Angry that the kids cleaned up his art work. So our teacher was thinking if we could make a little mini sky tower so first we were planning.Then we started making it with the Chromebook box's and Jane,Madison, and Simon were the leaders of the sky tower cause they were the first ones to make it when we were planning when we did it we got all the things we needed out first but we all had to do the paper work last. Which is the windows when we were done we busted it down and put the box's where it was when we started doing the mini sky tower. When we put the box's where it's supposed to be we wrote about it and it was so fun.
Posted by Norah Jade at 09:54 No comments:

In class this week, we are learning about turning Simple sentences into compound sentences.   We have to take the full stops away and put a comma instead. Then, add a FANBOY. 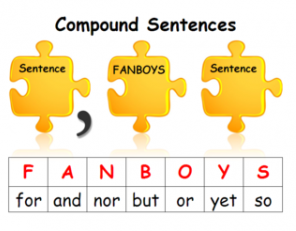